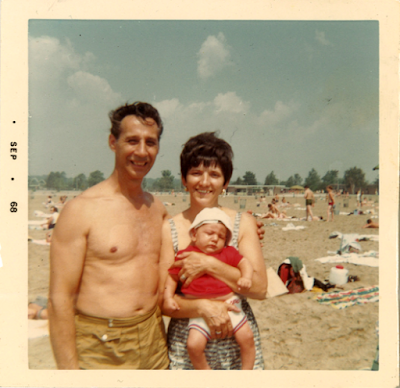 Adam with our grandparents in Wildwood, NJ - September 1968 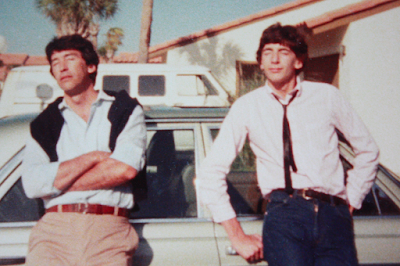 In on vacation in Florida with Dad. 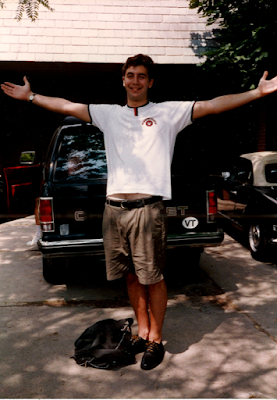 On his way to college in stompers and a crew tab. 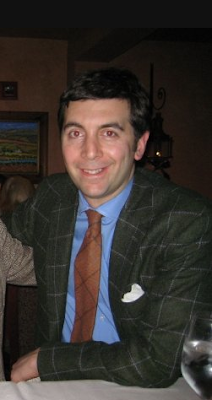 Double Windowpane on the night of my engagement. 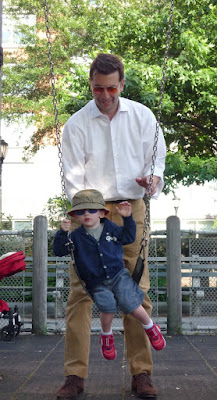 Swings with his son. Battery Park, New York.
On my 14th Christmas morning, he placed an envelope in the tree that contained a note instructing me to go to the hall coat closet. Inside it hung his black Schott perfecto, the jacket he'd donned daily through high school as one of Burlington's first punk rockers. It had seen The Clash and The Who. It had bombed hills and skated half pipes. Now it had been updated for that December 25th day with a DIY hand embroidery on the inner right reading "1978 ADAM 1998 TONIO." It was a little big, but I grew into it. I grew into the skating and the music as well.
When I landed an internship on Broadway and 57th the summer after my freshman year of college, he put me up and introduced me to his New York. Unsurprisingly, his neighborhood became mine when I had the opportunity to move back east after graduation.
I chose my older brother Adam to kick off this series because I feel that most designers first find inspiration close to home, whether they see something they aspire to or try to find something to rebel against. I've been fortunate enough to have lived in the same city as my older brother the entire tenure of my career and his subversive take on style and tailored clothing has always found its way into my work because of it.

Q: What's your trade?
A: I fix problems.
Q: How would you describe your personal style and how has it evolved over the years?

A: Punk rock italian country gentleman. As a kid, I was really into costumes - going to the grocery store with my mom in full pirate regalia or a suit of homemade armor. It's funny, my older son is exactly the same way. By the time I was first old enough to dress myself, I gravitated toward 1950s greaser style, inspired by my sense of my dad's adolescence: jeans, t-shirts and leather jackets. This wasn't a far step to Ramones punk, to Strummer/Rotten punk to straightedge and then on to mod, rockabilly, and a 1980s postpunk style in college. I discovered the suits, monochrome ties, tweeds, brown suede shoes and fedoras of Golden Age Hollywood in my early twenties, and refined that to italian tailored clothing, cutaway collars, and occasional flashes of bold color, combined with a continued healthy dose of t shirts, lugg soles and blue jeans, and the odd piece of actual hunting kit (particularly outerwear) up through today.

Q: The song/album that changed everything?

A: The first time that I heard the police sirens and power chords that erupt into White Riot I immediately understood that I had found The Only Band That Matters. I haven't looked back in over three decades.

Q: Deathbed meal?
A. Pomodoro in gelatina, bucatini amatriciana, my grandmother's braciole and my Aunt Dolly's meatballs, iceberg lettuce and tomato salad with olive oil, red wine vinegar and oregano finished with my wife's carrot cake and a bottle of 1998 Guado al Tasso.

Q: What brought you to New York?

A: It was the only place where I didn't have the nagging feeling like there was something better going on someplace else. That feeling went away everywhere else as soon I met my wife. In New York.

Q: What inspires you to stay and what pulls you away?

The endless possibilities of every day as well as the proximity of my brother. The promise of a normal life for my sons.
Posted by Enzo AGC at 9:08 AM

Old school 13th and wolf! Does not get better than this...

There needs to be study of pubescent punk rockers now appreciating traddish clothing. I'm finding it a personal anecdotal theme and I need some validation.

mostly I just need some other people around me who look presentable and like the Clash.

From the earlier pic of your dad in the same shirt, I'm guessing he rowed at UPenn. Did this run in the family?

J. Andrew - My father was the captain of the lightweight football team as there wasn't much opportunity to row in growing up in South Philly. Similarly, there wasn't a lot of crew up in Burlington, VT so Adam missed the boat (no pun intended) on that one too. What did run in the family was an eye for style and they both realized that crew tabs are a heck of a lot cooler than regular tee shirts.