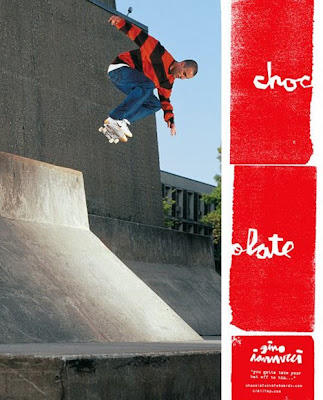 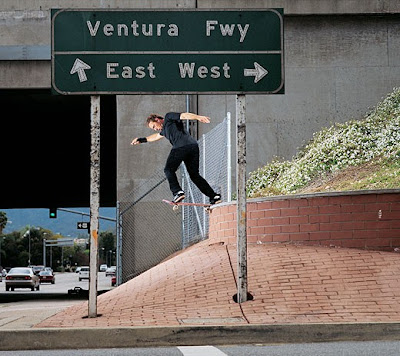 Guy Mariano
For as long as I can remember, my family has chosen its favorite sports teams based on the vowel at the end of name of its star players. Despite being from Philadelphia, Dad's whole neighborhood rooted for the DiMaggio's Yankees. When I was growing up in Vermont everyone always found it odd that we were Miami Dolphin fans. When Marino retired Dad switched to Testaverde. Despite my marginal interest in team sports it carried over to me as well. I've been skating Girl & Chocolate boards for close to ten years now, mainly because of the two guys above. Like DiMaggio, Marino & Testaverde (in college at least) these fellas' skills transcend their ethnic background. The vowel doesn't hurt though.
Posted by Enzo AGC at 10:02 AM

You skate? That's awesome. I was a boarder my entire youth. Alas, I became too tall to remain a skater and still pull anything off. I used to skate mostly girl and element featherlites. I have a friend who skated nothing but chocolate decks.

My first skate kicks were Mariano's signature shoes for whoever sponsored him pre-lakai. I used to ride Flip exclusively because of my skater-crush on Geoff Rowley. I wish I still had the time to shred, but alas those days seem to have passed...still watch the videos and read the mags tho...always inspiring.

David - I started in fifth grade and while I have slowed down (a ton), I can't really imagine ever not hopping on a board just to push around every once and a while. At this point, my wheels have gotten bigger and softer and my setup is mostly reserved for pushing to and from my car when I have to move it most nights. But that doesn't make me any less psyched on Gino two tricks in Mouse.

L.A.S. - You're probably talking about the Axions. I've still got a deadstock pair of the first Guy Axions. They're size 7 but I picked them up on ebay just for the history of them. Rowley is a badass. I always loved his part in Uno, the first transworld video.

Axion! Exactly. I got them on sale because all the cool Emerica shoes were too expensive, so I got this old Guy model for like $65...I fell in love with them and absoultely wore/skated them to shit. Good call.

When I worked at the local brewery because they had a satellite channel that played nothing but skate vids, so I managed to keep up on some of them.

Transworld was so much better than thrasher.

Did you guys ever get CSS or Action? We used to read them in class and pick out all the stuff we wanted.

LAS, my local skate shop had some sort of deal with emerica and DC, their shoes were always on sale. I had the Reynolds model forever and ever after I trashed the first Kostons in about a month.