Blazer Buttons - A Lesson in Self Expression 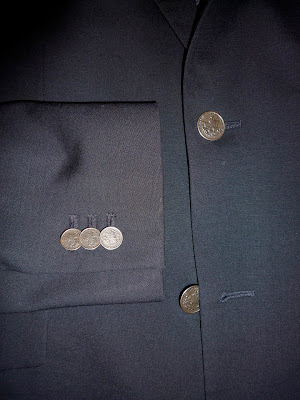 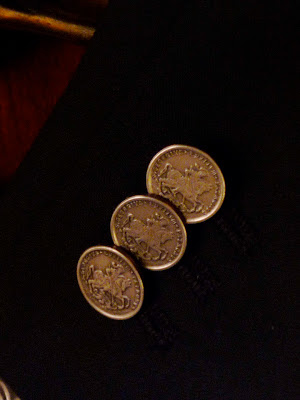 image borrowed from the web gallery of art
One of the most profound lessons my Father taught me was just to be myself. This lesson is a general as it is simple but as with most things on this site I'll try to apply it to timeless style. Its been my experience that a man never looks better or more comfortable in his clothes than when they are a direct reflection of his own personality. My Father would have argued that a man is who he is largely because of where he came from. So how does your background effect your style?
A while back I got a great deal on a well cut blue blazer with hacking pockets. Its only major flaw was the set of cheap, faux horn buttons that adorned its center and cuffs. The tonal effect they lent the jacket was suggestive of my early Alzheimer's as clearly I was forgetting my suit pants. The sole remedy for this premature onset of dementia, short of scraping the blazer all together was to invest in a new set of buttons. After asking around, I decided to check out Tender Buttons on E. 62nd St. The shear amount of choice was staggering: Gold, silver, mother of pearl, leather, French, American, Spanish, antique, contemporary...its enough to make one's head explode. Thankfully, the vowel at the end of my name guided me straight past the waspy gold emblazoned options to the boxes of silver choices. My eyes raced up and down through the various buttons, quickly filtering out anything of French or English origin until a familiar, comforting image stopped them dead in their tracks. There on a shelf in upper Manhattan, cast in in silver, the brave Roman soldier St. George rode on horseback, his lance poised to mortally strike the dragon, his legendary adversary. As a Renaissance art history enthusiast (or a Mitch Hedberg would say, a guy who likes the Renaissance), this image holds special meaning to me. It was used as metaphor for the enlightenment overcoming the darkness of the middle ages by the Quattrocento sculptor Donatello. His rendition in rilievo stiacciato, which I visited frequently when I resided in Italy, also incorporated the first use of linear perspective in marble since antiquity. The buttons are not only a symbol a lifelong thirst for knowledge but a reminder of my roots and my own coming of age in Rome. I could not think of an insignia more personal, perfect, or inspiring.
And I also happen to think they look pretty damned cool.
Posted by Enzo AGC at 10:03 AM

Great post about individual style and the fun journey, big or small, of making clothes your own. My only question: Working button holes?

It's amazing how a simple thing like a change of buttons can totally tranform a garment. Little fixes like that are a good thing to have in one's mind while thrift shopping.

It's great when there's a connection. My Canadian Airborne blazer buttons mean the world to me. Mostly because I earned them. Same with my Statue of Liberty blazer buttons. But the buttons I've always lusted for were a set I found at the Chicago Tender Buttons. They were from the military buttons from the American Revolution. Two large and four small. $3,000 for the set. I couldn't then and still can't but what a thrill that would be.

Giuseppe - Agreed in full. I'm up in Boston a fair bit in the winter. The next time we should me up and go thrifting. I can take you to a killer vintage spot that the polo guys raid for inspiration at least once a season.

tintin - I remember reading the post about your Airborne buttons. Great stuff. Tender's collection here in the city is amazing. I didn't realize that they had other locations. Maybe when The Trad, the book finally comes out (hint, hint, nudge, nudge) you'll be able to reward yourself with them.

I love the rhetoric on this quirky feature, Men get off on these luxurious nuances!