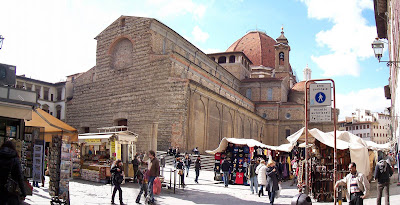 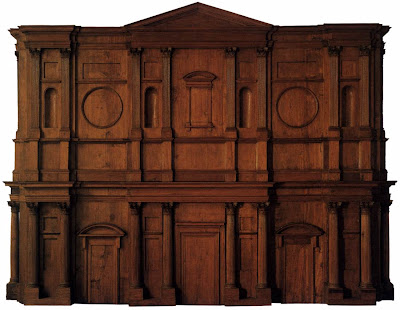 It was my freshman year of college. I had just moved back from Italy and the influence of the country's art still captivated my every interest. My creative writing teacher asked me to write an essay about where I saw myself in ten years. Needless to say, it began back in Florence in the Piazza San Lorenzo. I envisioned myself on the steps flanking the Medici family church, with a podium in front of me and Michelangelo's newly completed facade to my rear. As a Renaissance fanatic, my dream was to get that facade built as Michelangelo had planned it. I had succeeded and was about to commence with the opening ceremony.
While my interests have broadened in the past few years, I still think of that church, the Medici family who continually patronized it and the legacy that they left the world through art and architecture daily. That is why I was happy to discover yesterday that the Commune of Florence has been entertaining the idea of completing Michelangelo’s long abandoned plan. Some of the details can be seen here.
Now that we have successfully seen the revival of the classics in menswear I find myself wondering if and when a similar shift will occur in architecture. I liken contemporary architecture to a strong-shouldered, five button Armani suit: It may seem ground breaking at the time of its conception but centuries later it's just another preposterous monstrosity. Unfortunately, a retroactive shift in contemporary architecture is not as easy to effect as the ever moving tide of men’s fashion. A change in architecture would need to commence at the academic level and this would be no small feat. I know that at my alma mater’s school of Architecture the history books BEGIN with the Bauhaus movement. The only way an architecture student at USC can study Michaelangelo’s Porta Pia and Palladio’s Villa Rotunda is in an art history class. Vitruvius’s ten books on architecture were chucked into the furnace along with the coat and tie a long time ago. Now that the wardrobe is back I would love to see a push in new building as well. Maybe we should start with San Lorenzo and go from there.
Posted by Enzo AGC at 11:50 AM

Hi there! Did you learn about the plan to complete the facade from my website? I followed a link back from it to your site. The photo and post that I wrote about that is a bit old, and I have not heard anything else since. I have a feeling that the idea is dead, and it may have just been provocative (rather than serious) from the start. Do you think it would really be a good thing to put up a facade now?

Hi Alexandra, I did learn about it from your site. The book Dark Water has thrown me knee deep back into my fascination with Renaissance art and architectural history. I was planning on doing a post about the Medici, Michelangelo, and San Lorenzo when I came across your site. I do realize that this was old news but thought it was interesting because of my previous obsession with the completion of the facade. I do think that it would be wonderful to have Michelangelo's plan finally realized if it was done his way.

Check out Cinisello Balsamo if you want modern Italian architecture.Its near me and it sucks big time as do most of the Italian cities if you are out of the historical centre.