The Extinguished Flame of Delta Psi 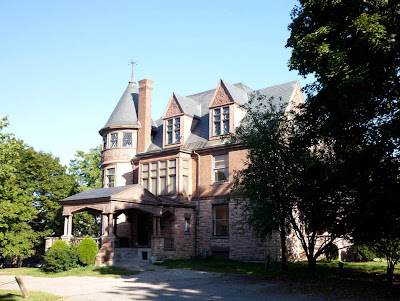 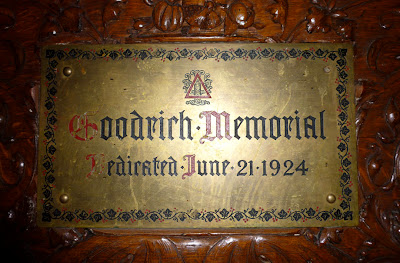 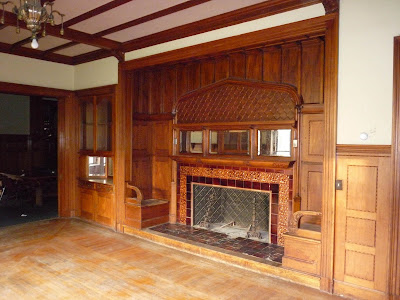 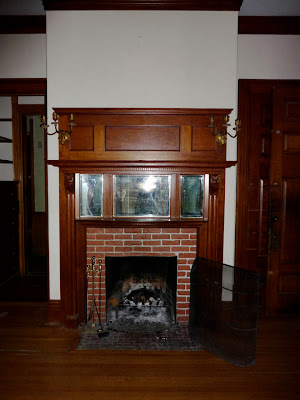 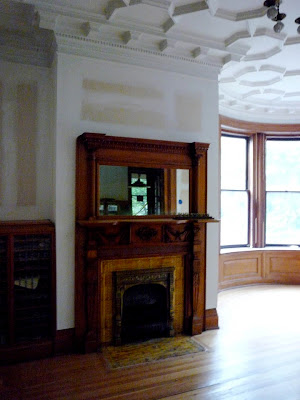 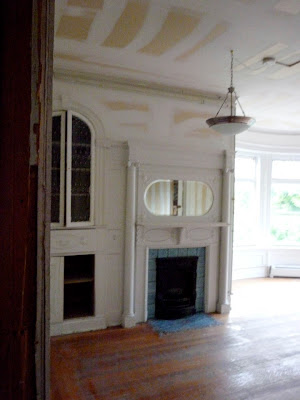 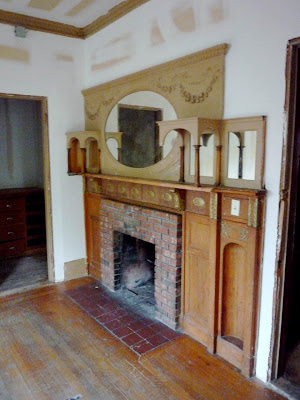 In 1850, a University of Vermont classics major named John Ellsworth Goodrich came together with a group of his fellow classmates to found the Delta Psi fraternity; an organization devoted to the promotion of Greek and Latin literature and deep-seated friendship. As interest in Goodrich’s group grew, he found it necessary to obtain a headquarters that would inspire its members as equally as the texts they enjoyed reading together. They found a home in the Richardsonian Romanesque mansion at 61 Summit St. Over the next one hundred and fifty years, Delta Psi evolved into one of the leading fraternities on campus and its awe inspiring residence attracted some of Vermont’s best and brightest young men including world renowned author and philosopher John Dewey.
I grew up passing this house every day on my walk home from middle school. I can clearly recall its members clad in brightly colored Patagonia syncillas, heavy norwegian sweaters & two tone CB down vests playing football on the front lawn and drinking cheap beer on the porch, the late fall sun reflecting off of their oakley frogskins. At the beginning of each semester, stop signs, street cones and other random neighborhood objects would start to disappear, the casualties of a semi-annual plegdship period. Dad never really paid the disappearances much mind. He was a fraternity man himself and could relate position the pledges were put in. He’d been through it in spades. One morning we awoke to find the marble bench that Dad placed under the maple tree that shaded our driveway gone. He marched straight over to 61 Summit St. and wrapped the bronze knocker on the front door until it dented the wood. “I would like my bench back please.” ”I’m sorry sir but I have no idea what you are talking about.” Dad strode by him and examined every room on the ground floor and saw no sign of the intricately carved bench. “The apple has certainly fallen far from the tree here,” he said as he walked out the door and back to our house without his stolen property. A week later Dad got another one, this time cementing it into place.
In 2003, the girlfriend of a Delta Psi brother called the police. Her boyfriend had been kidnapped she said. They found him hogtied, donning Oakley frogskins and drinking cheap beer in the custody of his own pledges (just kidding about the frogskins). This prank was the last straw for the University that agreed with my Father - The apple had fallen and the tree needed to be chopped down and burned. After a century and a half at UVM, the Delta Psi fraternity was indefinitely suspended. To make matters worse, their house, once the physical embodiment of the classicism and tradition their organization was created to promote, had fallen into disrepair and needed roughly two million dollars for restoration. The brothers and alumni scrambled to save their house but their efforts were too little too late and they were forced to sell 61 Summit St. to the university in 2007. The house has since been emptied and the current plans are to gut the inside and turn it into an admissions building.
A few weeks back, while home to visit my mother, I decided to take a walk over to the deserted house and poke around. I don’t know whether it was the thought of Goodwill’s dying legacy or the unfinished quest for my father’s bench that spurred my interest. I didn’t care. I found an open window and, after climbing through, took my time examining every room of the four story fraternity capturing images with my camera and my mind. On each floor was an eerie, empty sea of mahogany, coffers and bronze gilt light fixtures. Beautifully carved tables were stacked in piles in the center of the main hall. The library’s bookshelves were still filled with dust covered books on philosophy and antiquity. I found myself wondering if Dewey ever had a glance at any of them as I moved toward one of the many ornate, grotesquely decorated fireplaces. They seemed to be in every room, each one as distinct and different as the snowflakes so frequently collected on the house’s windowsills throughout those notoriously long, brutal Vermont winters. The fireplaces, like the house itself, were designed to motivate, to feed the fire of inspiration in its dwellers both figuratively and literally. Unfortunately, the light of Delta Psi has gone out and my father’s stone bench is nowhere to be found.
Posted by Enzo AGC at 4:13 PM

What a great story - well told! I love old homes like this - if the walls could talk---- Thanks Enzo

What a great house for such a terrible frat.

I too walked by it often, thank god they shut it down.

Now, like Middlebury, they should shut down all Greeks and work towards making UVM a decent university.

Amazing that its just been left.

Is it for sale?

As a former brother at Delta Psi, I am saddened to read this commentary. I can assure you in the early 90' s the traditions were strong, the friendships endured, and the history was respected (as was the house). What a loss for the fraternity, its history and its potential.

Fixed Bayonet - Its been sold to the University of Vermont which plans on gutting the inside and turning it into an admissions building. Sad indeed.

Anon 5:45 - I guess my post wasn't clear but I am anything but anti-fraternity. Every man in my family was in one, including myself, and we would not be the people we are today without them. Hell, this website wouldn't exist if the Betas at UPENN hadn't educated my father on the merits of the buttondown collar, indian madras and weejuns. What has happened to the Delta psi fraternity and their house is an absolute tragedy.

As for the statement that the greek system somehow devalues a university - well I couldn't disagree more. We live in a time where every aspect of our society, including academia, tells us to focus on the individual. The Greek system stands in direct opposition to this idea. It helps a man to realize that there are things more important than himself and that is something that I endorse one hundred percent.

Anon 8:51 - Please see above as I agree with you wholeheartedly. It kills me to think of what UVM plans on doing to your house. I will always respect Delta Psi for being the breeding ground of some of Vermont's best and brightest. The actions taken against your fraternity were heavy handed to put it lightly and I wish the outcome had been different...even though you guys did steal our bench..

Absolutely loved this piece. Pure nostalgia. Teaching young men that there is a power greater than themselves is indeed a valuable lesson. Best

KC - It is indeed. Thanks for the support. How are those milano and co. suits treating you?

KC - It is indeed. Thanks for the support. How are those milano and co. suits treating you?

The flame is not extinguished.
It is not visible to those outside the circle.
Ad augusta per angusta

"As for the statement that the greek system somehow devalues a university - well I couldn't disagree more. We live in a time where every aspect of our society, including academia, tells us to focus on the individual. The Greek system stands in direct opposition to this idea. It helps a man to realize that there are things more important than himself..."

If one needs a fraternity to realize this, it would seem there is something morally deficient about the individual to begin with. This might seem too blunt, or even crass, but I have yet to find beer drinking, token volunteerism, and greek rivalries to be a breeding ground of true communalism. I know my words are coarse, but I believe they are honest.

I too was a member of the prestigious Delta Psi Fraternity as an undergraduate, albeit a generation ago, in the late 1950's.
While visiting the campus last summer,I was distressed to learn of the brotherhood's demise and wondered as to the outcome of this magnificent edifice. I ached to look inside but dared not trespass.

It was a privelege to be a part of that esteemed brotherhood. The awards and acheivements of this group had been and were at the forefront and envy of the entire student body.

It is unfortunate that the actions of a few so tarnished the honor of so many.

I can only pray that the University will exercise its wisdom and resources to maintain and preserve this magnificent structure along with the history it deserves.

Hail to the everlasting brotherhood of Delta Psi

As a former brother, (once a Delt, always a Delt, however) it saddens me to know that articles are being written by those have but the smallest of inkling of what truly went on behind the great walls of the Goodrich Memorial. Indeed, public perception will no doubt suggest it was nothing more than a haven to drink "cheap beer" (as our author clearly believes), but to those who understand and who are aware, the Goodrich Memorial provided the opportunity for like minded individuals to engage and befriend one another.

It saddens me to know that there will be no more Delta Psi as we once knew it. The walls of the Goodrich may be used differently, but the history and lore of the Delta Psi Brotherhood shall live on.

I remember this magnificent house well, unfortunately, it was in a state of disrepair then -- in 1985! The brothers would have crazy keg parties and did much damage by their own hands to eventually ruin it. I'm surprised the mansion lasted until the University could reclaim it, pay for the renovations and bring it back from the brink of destruction. The brothers from 1985-on should be ashamed, but sadly, I'm sure they're not -- you see, one of them was my own brother.