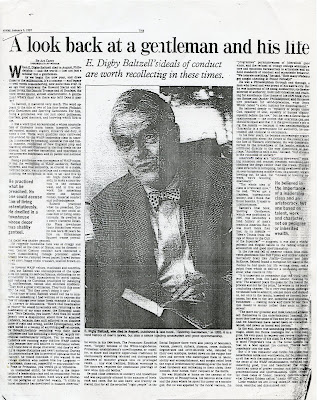 This article is a great read. It was discovered this past weekend when my brother and I headed up to Vermont to do some much needed cleaning at my parents’ house. He got there before I did and when I arrived I saw that he’d set it aside for me. Apparently, he’d found it mixed in with my father’s writing materials. Digby, like my father, embodied so much of what I love about menswear. Clothes were just one aspect of being a gentleman. The tweed and wool challis bowties were there but the key was to be well rounded. Dad and Digby had as much of an understanding of Plato and Cicero as they did of mixing a martini and running play action in the red zone. Everything was done well, but not too perfect. The gentleman’s c: To me that’s what its all about.
Posted by Enzo AGC at 2:09 PM

How did this get by me? Fantastic. Dead on. Right on.

tintin - Apparently it got by everyone. Its kind of like we discussed yesterday, most of the "readers" of these things place far more emphasis on the pictures than the prose.

Digby the gentleman had a large hand in why I do what I do.