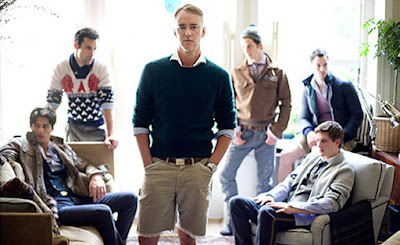 The following press release was waiting for me in my inbox when I arrived at work today. This is a great step for Gant. I was just admiring the revival of some of their heritage pieces at The Collective the other day. With Michael at the helm "The Hugger" will really be the hugger and probably the best RTW woven shirt on the market.

"NEW YORK, JULY 22, 2009 – GANT announces today that Michael Bastian, the menswear designer who has lead the return to a new era of all-American style, will design a Fall 2010 men’s capsule collection for GANT, the originator of American sportswear since 1949. This exciting collaboration will be unveiled this winter in New York and other key international markets.

Michael Bastian commented, “I see my version of the GANT guy as the younger brother to the MICHAEL BASTIAN guy. He’s tailored, a bit sporty, and a little more athletic, with a modern edge that feels both approachable and sophisticated. Working with GANT will allow me to reach a larger audience, and together we will provide a modern and workable proposal for the perfect American guy’s wardrobe.”

The 50 piece collection will stand on its own as a symbol of American design ingenuity, a colorful and focused collection of wardrobe essentials that provide polished style at more accessible prices.

Ari Hoffman, GANT’s US President and CEO stated, “We can think of no other designer that speaks the GANT language as closely as Michael Bastian does. His interpretation of American sportswear is quintessential. As GANT has grown into an international brand with a global focus, Michael Bastian will complete our journey back to the American sensibility of today’s GANT.”

That 20% figure does nothing for me. What's it going to be in an actual dollars and cents figure? Very excited though, because regardless of price point it looks like I will definitely be closer to buying instead of simply admiring Bastian's stuff.

I'm cautiously optimistic about this partnership. Hopefully Bastian can re-inject Americana into the brand because although Gant had been on a phenomenal roll for the past 5 or 6 years the last 2 seasons under Brian Rennie were awkward departures. The designs were good, but they were too European, and by that I don't mean British/American or Italian/American, but rather veering toward A.P.C. or Nylon magazine (Rennie was previously at Escada). Acknowledging that the brand is now Scandinavian owned, the roots and aesthetic should still take cues from the trove that Bastian will most likely be exploring.

Marcellus - I agree entirely. My hope is that this line will be basically pricepoint Bastian standards/basics with a nod to the heritage of the New Haven era Gant: his version of the classic "Hugger" 3 button button down shirt but with his neapolitan sleevecap and rear darts, great slim flat front chinos with a deep cuff, etc.