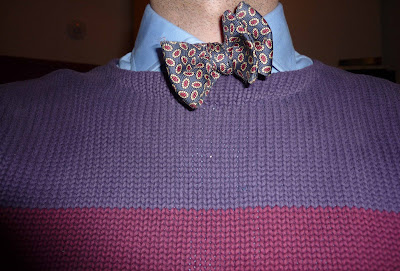 My father loved the boatneck sweater and bowtie combination.  Like so much of his style, this look was adopted during his undergraduate years at the University of Pennsylvania where he studied under the famed academic and sociologist E. Digby Baltzell. Professor Baltzell is credited for the creation of the acronym WASP and was known for his fondness for tweeds, regimental stripes, and bowties.  He was said to slightly favor athletes who excelled in academics because he believed that a well-rounded education had to include rigorous exercise of the mind and body.  Knowing this, the members of PENN’s football team would show up to Digby’s class in burgundy boatneck letter sweaters.  My father added the tie for extra points.  He continued this after graduation, changing only the side of sweater the world saw because PENN tradition dictates that letter sweaters must be worn inside out after leaving the shade of trees that line Locust Walk.  This morning, while thinking of him fondly, I grabbed my striped boatneck in PENN’s colors, one of his favorite bowties and headed out the door and into the sunlight.  I’d like to think that somewhere, he and Digby are chatting about their days together and smiling.

I'm SURE they are!