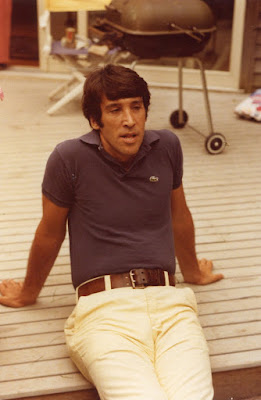 June 1980
My Father's thoughts about my weblog as shared in its very first comment back on June 10th, 2008:
"The best part of the 1960s in the Ivy league was the melding of the children and grandchildren of the the late 19th-early 20th century immigrants into "Americans". Our cultural differences were hammered onto an anglo-saxon preppy anvil and thus were forged the new Americans-the leaders of the 20th Century, the leaders of "one America". The clothing style of British public (private in the american sense) schools was the unifying symbol of our emerging generation. This was an enormously successful enterprise, perhaps, the most successful in recorded history in terms of upward migration of social classes. There is much to be learned from that American era. The rules of meritocracy, social asencion without regard to ethnicity, symbols designating heirarchy i.e., freshmen dinks, pipes, Sophomore cars and elbow patches, Letter sweaters worn backward or inside out dependent on status were our guiding semiotics. The western civilization ship of excellence and shabby elegance has been rudderless for more than a quarter century. It is time to look back; it is actually overdue, and to regain the best of America. Aldo Penn '64"
I could not have said it better Pop. Looking back to move forward.
Posted by Enzo AGC at 3:12 PM

Your father sounds like a fount of insight. I might be interested in interviewing him for Ivy-Style.com, similar to our interview with Ken C. Pollock here:

You can reach me at christian@stickpinmedia.com